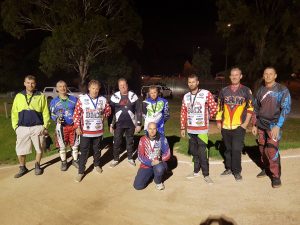 This week saw me step it up, with a massive week of training and retro BMX racing and quite honestly I can say I am stuffed, but I am very glad that I have done it and can feel the constant improvements every time I race.

My week started off on Tuesday night with the secret trainer, dusting off my old road bike and getting it hooked up to the wind trainer, it was all about sprint efforts in short bursts, these were a gut buster and the secret trainer was there right beside me on his bike toughing it out as well, I can tell you by the end of the session we were both feeling it, having given it our all and it was good to see that the secret trainer is human after all and also has limits that he can push himself to, if I can get to 85% to 90% of those limits I will be a very happy man.

After the Tuesday session, we doubled up and did the exact same training on Thursday night, this time I set up my Garmin Edge to track the stats with some very interesting results. Over the 30 minute session we rode the equivalent of 15 kms, my average cadence was 84, my maximum cadence during the sprints was 184. Here is where it gets exciting though, my average speed was 31.4 km/h my maximum speed was a massive 95.8 km/h, the next sprint session we do I will be aiming to break the 100 km/h barrier. The two sprint sessions, proved two things to me, one, I can spin my legs fast enough to be competitive and two I can hold that sprint speed for 30 seconds, so I am starting to get fit enough.

Wednesday night saw myself at Frankston BMX track, for a gates session, I was there more to roll around and try a few things out rather than exert myself after the sprint session the night before. The benefit I got from the night though was that I rode around the track behind a sprocket, who was riding at race pace and as funny as it sounds, I looked to see where the sprocket was pedaling, I found that a sprocket will start pedaling at the top of a jump and pedal down it, where I was pedaling at the bottom of the jump and maybe only getting one or two pedals in before the next jump. Simply changing where I am pedaling I am confident that I have easily found a 2 second improvement, possibly a little more.

Friday night, was the first night of a double-header of Retro BMX racing, with Round 1 of the Frankston Summer Series, 8 riders lined up on the gate with some fast and furious racing, Friday night saw the return of Luke Cristiano to retro racing and a return to the Frankston BMX track after a hiatus. Luke took out the retro final, closely followed by Scott Burgess and Ashley Grange, new comer Mark Mecuri, made an impressive debut and finished fourth, Phil Pearman in 5th, the quickly improving Amelia Patterson, finished in 6th in a photo finish with Phil, myself retroracer31 came in 7th and young Casey Patterson was a very impressive 8th, who has just this year graduated from sprockets and into the 8 to 13 junior retro ranks and is mixing in with the big boys. Personally I can feel the improvement, the small speed increases and most of all I can now race to the end, where is I would usually turn off and roll through the last one and a half straights.

Saturday night was the Knox BMX clubs Extreme clubby an incredibly well run event, which was a lot of fun, retro class had 2 young men going at it all night in the junior retro class with Casey Pattison and Jenson Brown, going at it all night, Casey Pattison would prove to be the victor for the night. In the senior retro division, we had 9 riders, which proved interesting when it came for spots in the final. The night of retro racing featured the return of Nick Searle, who proved to be the winner on the night and it was great to see Stuart Marshall back out there and racing after an enforced injury layoff. Up at the pointy of the field Nick Searle, Brendon Marshall and John Mafrici fought it out for the podium spots, the real racing was at the back of the field to see who would scrape into the final and who would miss out, after 2 motos, Amelia Pattison held a slight advantage on 8 points, myself on 9 points and Ash McComb on 9 points, with 9 riders competing over 2 gates, it was up to the BMX gods and they dictated that the 3 of us would be in the final moto together, this basically meant that who finished last would miss out on the final and unfortunately I had drawn gate 8 so I had my work cut out for me.

From the start gate the 3 of us were fairly even, I knew that there was no way I could ride over the top of them on the berm and I would lose too much ground, I decided to tap the brakes before the doubles and cross behind the 2 girls, I pushed through the berm and down the 2nd straight and into the third straight, after we hit the rhythm section, Amelia was too far in front for me to catch, I did think I would be able to get Ash though, I was pumping through the rhythm a little faster, I crossed from the outside of Ash to the inside and was able to take the inside line on the final berm, which gave me just enough momentum to be able to hold off and take the last spot in the final. I gave it everything in the 3rd moto and as far as I was concerned that was my final for the night, I eventually brought up the tail of the field for the night and finished in 8th place.

I am excited to see the little improvements I am making every time I race now, my heart rate is getting lower, early in the year it was maxing out at 170+ now it is in the mid 160’s, my max speed though is showing improvements every race meet, from the 3 race meets at Knox so far this year over a 4 week period, I have gone from a maximum speed of 31.7 km/h to 32 km/h and last night to a top speed of 32.8 km/h. Tomorrow night I am back training with James Tait and looking forward to my next race on Friday, Feb 24th for Round 2 of the Frankston Summer series. 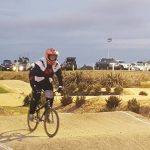 Bringing it home at Frankston 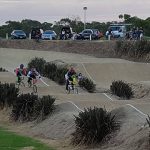 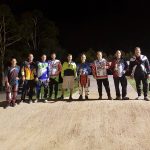 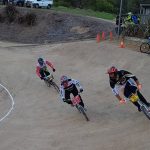 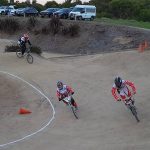 Racing at the back of the field.