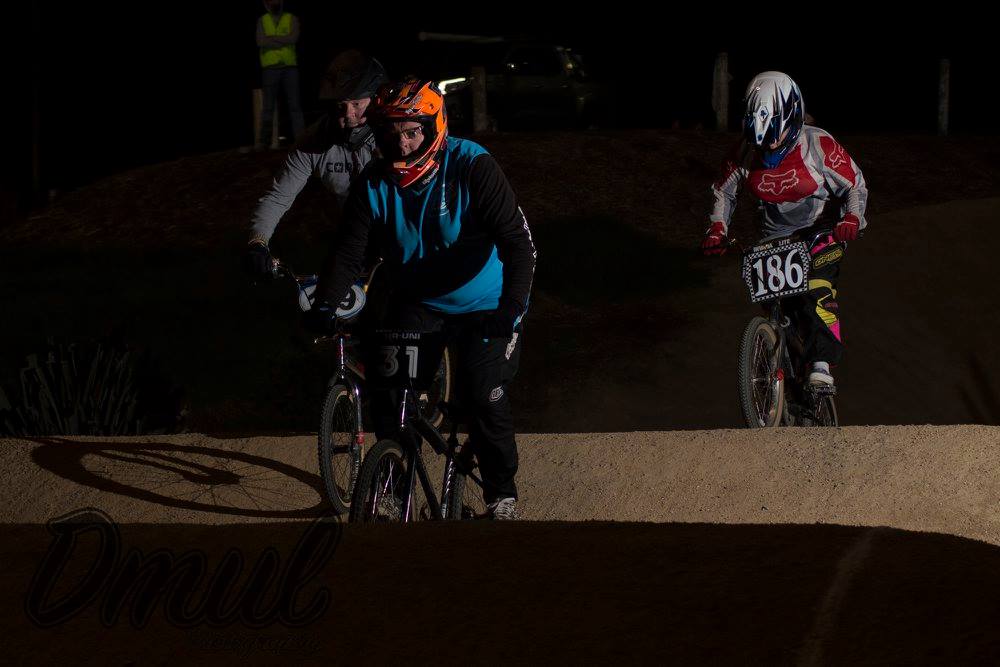 Friday night, 12th May 2017 saw us at the 5th round of the Frankston Summer series and with only one round to go, it is serious business, particularly for people like myself who are on the cusp of the top 8 and in for a chance of an award for the series.

Eleven people were racing the retro BMX class for the night and as usual with an odd number of riders it would come down to the BMX gods to be on my side to get through to the main final for the night. The first moto I was on track to claim a spot in the main, with a 4th place finish, alas the BMX gods laughed at me in the second moto, where I was in the moto of 6 people, which was absolutely loaded, unfortunately I finished a distant 6th and even though I pulled another 4th in the 3rd moto, I knew that the 6th place finish had ruined my chances of making the main final.

Come finals time, my name was called out for first lane pick in the invitational final, I chose lane 3, Aleisha Grange surprisingly chose lane 4, I personally think that she should have chosen lane 2 so that she would have had the inside line going into the first berm, Dan Gregory took the final pick and chose one of the outside lanes, I think it was lane 6 but was not entirely sure.

Standing behind the gate I knew that I was in for a race, Dan Gregory is rapidly improving and has done a tonne of work in the rhythm section and his improvement is really showing and any time you line up against the retro twins Aleisha and Amelia or their younger brother Casey, you know they will all be gunning for you and laugh manically as they cut the inside of the berm in a line so tight that you know you can’t follow them.

The gate drops and I push-off the gate as hard as I can, hitting the first jump, I can see Aleisha beside me and know Dan is right with us, we hit the 2nd jump in a line and go into the first berm, I cut down on the inside, stopping Aleisha’s run, go back up to about half the height of the berm and cut back down gaining speed, I hit the rhythm section in first place and start pumping to generate more speed, I chose to take the middle of the straight and try to make myself as wide as possible so neither one could get past me, it was here that Dan’s training paid off and he pulled in front of me on the inside by the end of the rhythm section. I hit the 2nd berm in 2nd place and pedal towards the first jump in the third straight, pedaling down the back of the jump, towards the next jump. Dan has taken the inside line and I have no choice but to take the outside line, if I was to run him down, I had to take the long way home and get past him in the last straight.

We get to the third berm and I am right on Dan’s wheel, Aleisha is right on mine, there was no room for error, Dan takes the inside line of the berm I take the outside, leaving Aleisha with no place to go, with extra pedal strokes and a bigger down hill run in from the berm, I was able to slowly catch Dan, half a bike length, quarter of a bike length. half a wheel, over the last jump, almost side by side, neither one of us with anything left in the tank, I pedal from the last jump to the finish line, we hit the line. Who got it? I have no idea, Dan has no idea, the win is given to me and with that I take my first race win in retro BMX racing, it may have been a B final, but taking a win, is a great feeling and is a great incentive to keep plugging away and watching the improvements.

That was the hardest race I have done, I left it all out on the track and wasn’t able to do anymore, I was sucking in the big ones trying to replenish my body with oxygen, the main finalists by this time had crossed the line and every one of them said what a great race we just ran and that it was awesome to watch, got to be happy with that.

A big shout out to the crew at Frankston that have turned the club around in the last 12 months and thanks to Dmul Photography that took a bunch of photos on the night.