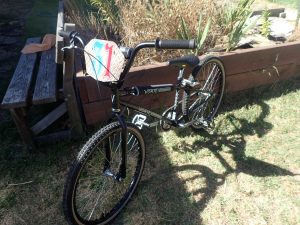 The last week has been an interesting one, whilst I had planned to step up the number of days I was going to train, I found that I was without a bike, the old Vortex Cruiser has gone through a rebuild and the crank bolt that goes through the chain wheel and into the back of the crank, turns out I had accidentally sent to QLD, when I traded my 180 cranks for 175s, fortunately the bolt was sent back express post and I received it Friday and had my Vortex BMX built just before race time.

Tuesday saw me back with the secret trainer, doing further strength training, mixed in with a bit of cardio, whilst I feel the muscles around my knee getting stronger, the training doesn’t get any easier, the weights build up and with the bit of cardio mixed in, I am constantly out of breath and fighting to stay standing on my feet and not curl up in a ball. We did do something new though and I immediately was apprehensive, instead of box steps, we started doing box jumps. Here is the thing though, if humans were meant to be in the air, we would have wings, I have not had reason to jump onto anything and get both off the ground at the same time for over 20 years, my arms were flailing, my fat gut just about knocked me out on each jump, I am sure it would have been rather funny to watch, as this over weight middle-aged guy was jumping 6 inches into the air onto a box. I don’t think we will be seeing any YouTube videos of me box jumping 2 meters into the air, anytime soon.

With Tuesdays training a distant memory, Friday saw Knox hold its first fun clubby for the year, 9 riders were in the retro field and I was excited to see if there was any improvement from my last race there during Track Attack, which quite frankly I was disappointed in. I am happy to say that I am starting to see improvement in my knee and I am able to start without too much pain that I was constantly experiencing previously. I also had my best moto result crossing the line in 2nd place in the third moto, I had to dig deep and ride it out on the last straight, but I can see as my fitness increases that I can ride out the race better and have started earmarking fellow retro racers that are finishing 3 to 4 seconds in front of me currently. In 8 weeks from now those that are finishing 3 to 4 seconds in front of me I want to be racing head to head with and beating them. I see the steps in front of me and now have a plan of action in place to take those steps.

The stats from the race compared to my last race during Track Attack, have improved as well, Max speed was 32 km/h as opposed to 31.7 km/h, max heart rate was 171 bpm as opposed to 174 bpm, but the massive improvement was seen in my average heart rate of 149 bpm as opposed to 159 bpm. I also found that my recovery after the race was quicker than the last time as well, so for me now it all comes down to more training and with my bike up and going after its rebuild, I plan to step it up, Monday night back at Knox with James Tait for the first training session with the young man for the year, Tuesday strength training with the secret trainer, Wednesday night gates at Frankston, sprint training with the secret trainer Thursday night and if I can still move my legs, I’ll be there for Round 1 of the Frankston Summer series Friday night and there maybe an open meet at South Eastern on Sunday to boot, but I haven’t completely made up my mind on South Eastern yet.