Retro BMX racing season is up and running

The 2017 Retro BMX racing season kicked off this week, with the Track Attack series, 6 race meets over 9 days, it is a brutal welcome back to the race season and is a good spring board towards training for the national titles if you plan on doing them. From a personal point of view I decided to only do the two rounds to get some time back on the bike on a track which was sorely needed, other than a few training sessions I haven’t raced since the Victorian BMX state titles in November of 2016. I really didn’t expect too much as the training I have done recently was more based around strengthening my troublesome knee rather than riding fast. That being said I was still a little disappointed that I didn’t go faster than the recent open meets at Knox and Frankston in November and October of 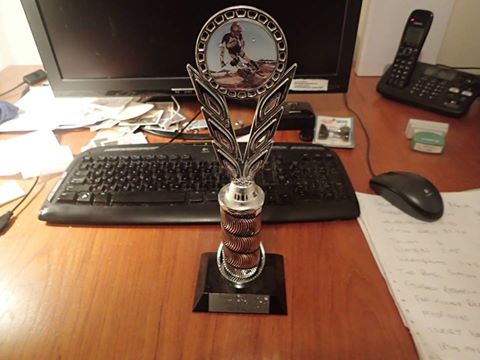 Going back in August of this year, I happened to go down to Frankston BMX track on a Friday night to drop off a few parts and inadvertently ended up racing, the following is the story of the evening, but included in the pictures below are the Facebook comments which had me in tears where I read them, I have taken screenshots of the comments and blurred out the names, I hope you enjoy reading it as much as I did. The spoils of Victory. Popped down to Frankston tonight to pick up a bike and drop off some pedals, I had zero intentions of racing. With only Scott and Don entered into retro, they looked at me with a forlorn look on their faces, saying, “mate we need 3 for a gate”. I tried to explain that I had no race gear with me, just my bike in the

Over the past 14 weeks, the Frankston Sharks BMX Club, have held a 7 round race series which they dubbed Helltrack, held every second Friday night from early September, November 25th marks the last round of the series and the awards night for those that have qualified with both attendance and the points earned through out the series. From a retro stand point, the series has been well supported with an average of 8 to 10 riders each round, a fast flowing track, Frankston is one of my favorite tracks to ride and it also happens to be the closest to where I live, which is handy. Thanks to Ash, we do have some footage from Round 4 of the Helltrack series, enjoy.   With the 2016 race season fast drawing to a close, Fridays racing is one of the last opportunities to get out there on the Old School

Name: Ashley Grange Home Club: Knox, Vic. Classes: 40+ Retro Bike: 1983/84 Profile Champ Best Retro Results: 3rd Lilydale back to the valley 2016 3rd Frankston Helltrack series 2016 4th Frankston Helltrack open 2016 6th Vic riders cup Wyhndam 2016 6th Park Orchards open 2016 8th Knox Thunderdome 2016 12th overall Victorian State Titles. About Me: I’m 40 years old and started racing bmx in 1982. Numerous race wins and state plates between then and when I stopped racing in 1988. My best effort was 4th in the 9 boys expert state title and 7th in my last state titles in 1988. Raced Australia titles in SA in 1986 and missed out on a spot in the final due to a heavy crash in the semi while leading. Fast forward 28 years to 2016 and I’m back out on the bike racing and loving it. Sponsors: Old School BMX Progressive