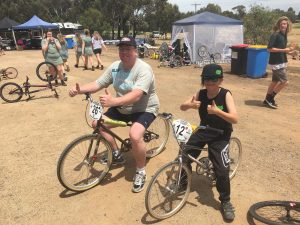 The first Victorian retro state titles are now finished and I am absolutely buggered, the heat and the humidity really knocked me around, so much so that each of my motos was slower than the last one, unfortunately I did not beat my fastest time at the track from the final of the open meet about a month ago, but I am sure if the conditions were more favourable I would have gone out there and achieved a better time.

The personal highlight of the day was the competition I developed with 8 year old retro rider Jenson Brown, who rides in the 8 to 13 year old class, he was despondent after his 1st moto where he didn’t beat anyone home. His Father spoke to him and told him that had improved his lap times by 5 seconds from the last time he was there, his time of 59.247 as opposed to my time of 59.365. Being a fellow retro racer who just so happens to race the same brand as bike as myself, Vortex, I had a chat with him and said let’s make the racing between the 2 of us and see who gets the fastest time of the day and if he beats me, he would get the packet of lollies that I had in my esky. That brought a smile to his face and as it turns out the times from the first moto were our fastest times for the day, I lost my packet of lollies. Here is the thing though, I had left the track and had completely forgot to give them to him, so Jenson, when you read this, I have the packet of lollies for you the next time we race together, not only that, I have the matching top tube pad to go with your handlebar pad, that is yours as well, just so long as you keep at it and keep racing retro, see you out there young man.

Retro racing was fast and furious and it was great to see so many young people out there racing, the stand outs for me, was seeing 9 year old retro racer Samuel Todd make it into the final and walk away with 7V against much older kids and in the 14 to 29 age class, Amelia Patterson, who races retro week in and week out walk away with 7V and in the 30+ a big shout out to Neale who after a frustrating year of with 5th places in the semis at both the Australian championships earlier in the year and the Harry Leary retro night at Knox, he scraped through against some munch younger guys and goes home with 5V.

Whilst I have some highlights from the day of racing I also have some criticism and this is directed purely at BMX Victoria in the hope that they make improvements in future years. Retro as a class is getting bigger and bigger, with more and more people coming out to race it constantly, with a total of 48 entries in 3 classes it shows the popularity of the sport and it is time to embrace it and recognise that BMX is not all about creating Australian, World and Olympic champions, it is about getting bums on seats and attracting new people to the sport and retro is doing that more than any other single class.

As a class we paid the same as other classes to be a part of the Victorian Championships and as such deserve the same as every other classes, I am sorely disappointed that there wasn’t a official photographer on the track taking photos, nor was there Video taken of the retro classes as well, as I am sure there will be with the Saturday and Sunday racing. All I ask is that BMX Victorian recognises the efforts that has gone into building up retro over the last 2 years and treat us the same as all other classes, rather than looking at us as a by-product of BMX. 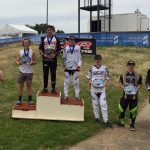 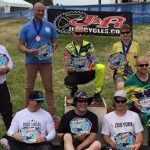