Retro racers, turning it on at Knox

With the relaxation of the retro rules in Victoria and the removal of the pre 1986 rule that is stifling retro racing in many other states, retro is now going from strength to strength. Other states and the National body should take note on what we are doing and adopt our rules, if they want to see retro BMX racing flourish. Twenty retro racers made their way to the Knox BMX track in the South Eastern suburbs of Melbourne Australia to race retro BMX for the night, with a few doubling up and riding 2 classes. With this many riders, spots in the final were going to be hard to get and everyone would need to be on top of their game.

Whilst all the familiar faces were there it was good to see a few others that don’t make it down to Knox too often, Paul Knox who is training for a New Zealand v Australia retro race series that will be held in May of this year and a big welcome back to Lex McComb who is back for his first race after fracturing his collar-bone back in January.

From a personal point of view, my first moto, was my best moto of the night, coming into the final berm I was only 4 seconds behind a group of 3 directly in front of me, 6 months ago I would have been about 8 seconds behind and completely winded and rolling through the last one and half straights, with the training I have been doing I can race the entire length of the track, the two big improvements for myself that I can see, will be getting the burst of speed out of the start gate and getting comfortable on the track and confident in my skills, particularly when I go over some of the bigger jumps and get a bit of air. When I get comfortable within myself I can see there will be extra speed and faster times, that will tumble quickly. That being said, I am getting faster week in and week out, go back just two weeks and my maximum speed at the Knox track for the night was 32.8 km/h, Friday night saw me hit a maximum of 33.1 km/h. There is plenty of work still to do, but I can see the small improvements every time I am out on the track.

With 20 riders on the gate, we had semi finals which saw some fast and furious racing and two invitational finals and a main final, the C final, which I was in was raced just as hard as any other final on the night, I rode as hard as I could and finished behind Stuart Marshall who crossed the line for his first win, which is great to see, closely followed by the quickly improving Amelia Patterson, myself a close up third and Dan Gregory bringing it home for fourth.

The B final, was a great race, Don Davidson got a cracking start and was the early leader, Tom Polkinghorn showed his class. by taking out the B final and Darren Stevenson rode a brilliant race to take out second spot in a very strong field.

The main final for the night was a cracker with the commissioner Gordon MacRae taking the early lead, Michael Herceg in 2nd, Layne Riches was traveling in third place. Michael Herceg got some extra speed in the rhythm section and was able to mow down Gordon in the home straight to take the win, Layne Riches was able to hang on to third place, closely followed behind Victorian championship semi finalist Brendon Marshall in a very close fourth.

With the first round, now behind us it is time to look forward to the next week, which will see me back out on Monday night with the evil James Tait, followed by strength and sprint training with the secret trainer, Tuesday and Thursday night, racing the 3rd round of the Frankston summer series Friday night and then a road trip to Wodonga to race the Border open meet on Sunday and to strengthen my position within the Victorian State Series where I am currently in 2nd place in 40+ retro. 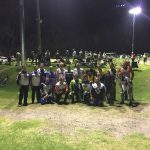