Portland BMX club, held the latest round of the Victorian State Series and whilst the pictures of the track taken Friday showed it looked a million dollars and the reports from those that practiced on Saturday afternoon, the weather Gods interrupted the proceedings and put on some terrible weather for all the racers.

At about 3am a monsoon hit the area and dumped a tonne of water on to the track, unfortunately this was more than the track could handle, all of the hard work that the Portland track crew had put in was wiped out in one foul swoop. Unfortunately the rained continued for the next several hours and for many of us we got our first taste of Winter that is not too far away.

Even though the track had suffered from a torrential amount of rain and the track had been ripped up by bikes trying to get through it, it was decided to get the race meet under way albeit modified to one moto and a final, which in the conditions of the day no one was complaining about.

I did the one warmup lap trying to ride through what can only be described as a mud pit with thick clay like mud that sucked your tyres making the going incredibly difficult and the ground also had a tendency to move under you which made the lines you chose to run around the berms vitally important. It is the first time I have ever stopped on a track, having stopped on the first jump in the last straight before I decided which line I would take not only in the warmup but for the racing to come, I decided it really didn’t matter as it was all about the same.

The first moto was a slug fest with the retro classes playing follow the leader to stay up right and safe, in the senior retro Danny Booby took the win, with retro racing new comer Steven Hajnal a few seconds behind in second and myself a mile back bringing up the rear in third place. Over in the junior division, Samuel Todd kept up his impressive run in the retro class taking out another win, who would prove to be the winner of the day and young Jenson Brown in second place.

The second moto, the final for the day, proved to a beauty with Danny Booby looking to be heading towards an easy win, how ever Steven Hajnal put down the after burners in the last straight to pip Danny on the line and on the same amount of points, Steven took out the win for the day as he won the final. This makes things very interesting in the Victorian State Series, with Danny believing he was heading for a win and only ended up second for the day he was only able to claw back 2 points upon myself and at this stage I am still the leader on the 40+ retro class in the series. We have a break now from open racing to allow foe the BMX National Titles that are on at the end of the month, before we head back to Warrnambool May 21st, where once again I will be out there, trying to hang on to that all important number 1 plate. 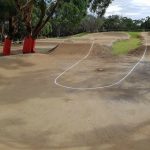 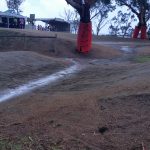 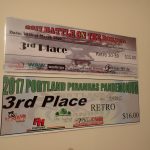