Friday night, 25th, November, 2016 saw the Frankston Helltrack 7 round series finish up and with that, it wraps up the 2016 retro racing season for the year, with only the fun Knox Christmas clubby to go, it is time for most of us to enjoy a well earned rest and give our bodies a chance to recover and go into the 2017 season raring to go.

Back to Friday nights racing though and the retro class had its biggest numbers for the series, with a number of newly plated Victorian championships riders coming out for a last hit out, the field for the night, included the 4V, 5V, 7V and 8V, add to that 2 semi finalists and a return to retro racing of Gordon MacRae and Layne Riches we were in for a fun night and some fast racing.

16 entries but by the time the gate dropped, we had lost two, 14 of us battled it out over 3 motos to see who would make it to a very high quality main final and the invitational final.

As the racing ended for the night and the winners received bragging rights to carry over into 2017, the important part of the night was unfolding and that is the overall placings for those that had qualified and had raced throughout the series.

Thanks to the Frankston Sharks BMX club, great fun was had by all, not only on the night but for the entire Helltrack series and I am sure I speak for all the retro BMX racers, when I say that we look forward to being back racing next year in 2017. 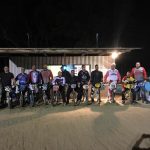 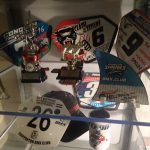 New addittion to the trophy case